You are here: Home1 / News2 / In the media3 / Montreal tenants protest lack of heating 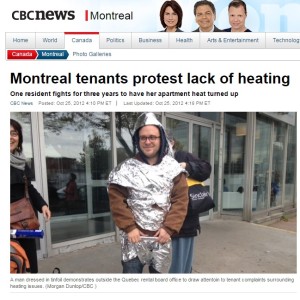 Some Montreal tenants who say their landlords have left them in the cold demonstrated today in an attempt to get the attention of Quebec’s rental board.

They staged a protest outside the board’s offices in downtown Montreal, out of frustration over “excessive” waits for hearings on the issue.

Community organizer Sheetal Pathak said that many landlords try to save money by not turning on the heat until December.

Pathak says she’s heard a wide range of excuses from landlords, including “I don’t have to put the heat on until there is snow on the ground.” 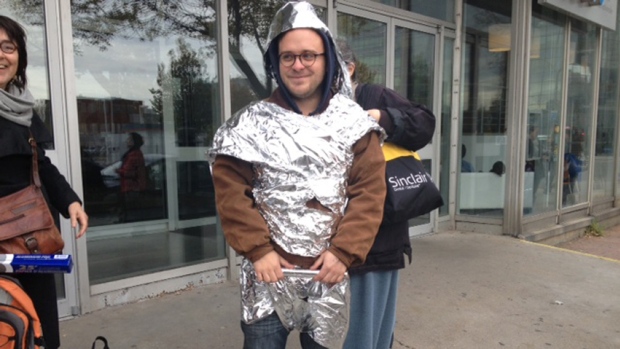 A man dressed in tinfoil demonstrates outside the Quebec rental board office to draw attentoin to tenant complaints surrounding heating issues. (Morgan Dunlop/CBC )

Margaret Prince has been fighting for a wamer apartment for three years. She says her cold apartment has compounded her bladder problems.

“My apartment was so cold, when I’d come in from outside I couldn’t get warm,” she said.

Once a tenant sends a complaint to the rental board, they could be stuck waiting for months, or even years, said Pathak.

The rental board has no way to deal quickly with cases like Prince’s, she said, where the health and security of the resident could be at risk.

She added tenants can sometimes wait up to 20 months for a hearing and even if the case is marked as urgent, it can take up to two months.

“We think it’s completly unfair,” Pathak said. “Tenants who are stuck in this situation cannot get justice at the rental board.”

“People end up waiting many months in the winter in badly-heated apartment.”

Pathak hopes today’s demonstration will raise awareness about the living conditions of many Montrealers.

“The point is to show how ridiculous it is that people have to take measures to fend for themselves,” she said.

Housing rights tribunal bogged down by inefficiencies
Scroll to top