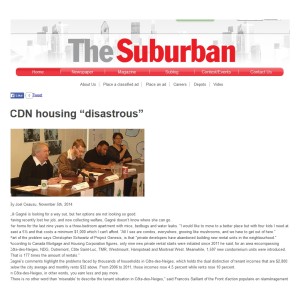 Lili Gagné is looking for a way out, but her options are not looking so good.

Having recently lost her job, and now collecting welfare, Gagné doesn’t know where she can go.

Her home for the last nine years is a three-bedroom apartment with mice, bedbugs and water leaks. “I would like to move to a better place but with four kids I need at least a 5½ and that costs a minimum $1,000 which I can’t afford. “All I see are condos, everywhere, growing like mushrooms, and we have to get out of here.” 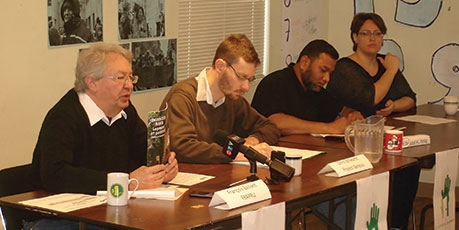 Part of the problem says Christopher Schwartz of Project Genesis, is that “private developers have abandoned building new rental units in the neighbourhood.”

According to Canada Mortgage and Housing Corporation figures, only nine new private rental starts were initiated since 2011 he said, for an area encompassing Côte-des-Neiges, NDG, Outremont, Côte Saint-Luc, TMR, Westmount, Hampstead and Montreal West. Meanwhile, 1,597 new condominium units were introduced. “That is 177 times the amount of rentals.”

Gagné’s comments highlight the problems faced by thousands of households in Côte-des-Neiges, which holds the dual distinction of tenant incomes that are $2,800 below the city average and monthly rents $32 above. From 2006 to 2011, those incomes rose 4.5 percent while rents rose 10 percent.

In Côte-des-Neiges, in other words, you earn less and pay more.

“There is no other word than ‘miserable’ to describe the tenant situation in Côte-des-Neiges,” said Francois Saillant of the Front d’action populaire en réaménagement urbain (FRAPRU), who along with Project Genesis and OEIL Côte-des-Neiges presented the report- Dossier noir sur le logement et la pauvreté based on data from the 2011 National Household Survey (NHS).

While the situation in Montreal is generally bad, Saillant says Côte-des-Neiges has it worse – “by a wide margin.” More than 15,675 local households pay more than the recommended 30 percent of income in rent and of these, 27 percent pay more than half. Worse still, are the staggering 5,060 who spend more than 80 percent of revenue to house themselves, more than the Canadian average.

Schwartz dubbed the situation in general as “disastrous,” but says the housing status of Côte-des-Neiges’ new arrivals is “scandalous.” The area counts 6,220 tenant households who arrived between 2006 and 2011, a third of whom spend more than 50 percent of their income on rent, and a fifth spending more than 80 percent of their revenue. Four out of ten live in overcrowded dwellings, far above Montreal’s 12 percent average, and for many mold and bedbugs is the norm.

Schwartz says it’s clear the Hippodrome project must go forward with a minimum 2,500 social housing units, even following revelations that the deal handing the 43-hectare site to the city for primarily residential development was never signed, and overly optimistic in forecasting housing stock quantity.

“It’s a major opportunity that will never come back: There is nowhere else in Côte-des-Neiges. It can’t be wasted,” he said, recalling community groups have been unanimous in that demand for more than 20 years. “And the situation is getting worse.”