Opinion: Bill C-43 would allow budgets to be cut on the backs of some of the most vulnerable 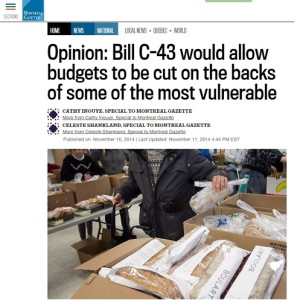 Jeanne arrived in Canada from the Philippines under the live-in caregiver program. Her employers were decent and Jeanne had high hopes of sponsoring her husband and four children to come to Canada once she was granted her permanent residence status. But, when Jeanne had a baby daughter, things took a turn for the worse. She had to leave her caregiver position because she could no longer work the long hours that her employers demanded, nor could she afford childcare of her own. After that, she had a difficult time finding full-time work and making ends meet. 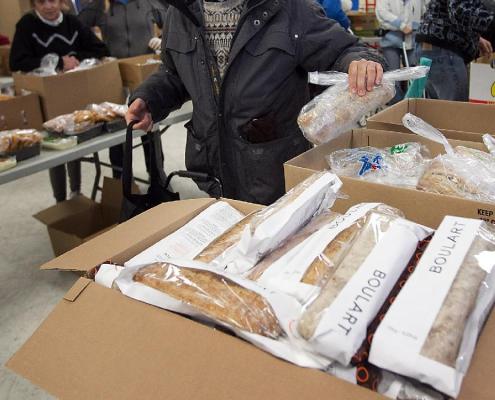 Jeanne came to Project Genesis, a community organization and walk-in clinic in the Côte-des-Neiges area of Montreal, for help in the fall of 2011. A recent nanny job had ended and, unable to find more work, she was two months behind on her rent and facing eviction. With the approaching Montreal winter, a little girl to take care of and no money to rent a new apartment, Jeanne was desperate. Project Genesis helped her make an application for last-resort financial assistance from the Quebec government and she was eventually granted $700/month for five months, just enough to pay rent on a new apartment and to get back on her feet. Welfare was “not easy to apply for,” Jeanne said, but “when you can’t find a full-time job and you have a little girl to take care of, it helps a lot.”

Tucked into Bill C-43, the federal government’s omnibus budget bill, are a few short paragraphs that would allow provinces to deny Jeanne, and others like her in dire circumstances, access to financial assistance. The provisions would allow the provinces to impose a minimum residency period on people before certain categories of people could be given access to social assistance, among them temporary residents, refugee claimants, people awaiting pre-removal risk assessments and people who have been allowed to stay in Canada on humanitarian and compassionate grounds. In effect, people like Jeanne and her daughter, who have tenuous status in Canada and are struggling to survive, could be excluded from access to income assistance in times of real need.

If the aim of these provisions is to encourage the provinces to cut costs on social assistance payments, then they are doing it on the backs of some of Canada’s most vulnerable residents. These are people who already face major obstacles to “making it” in Canada including a poor labour market, discrimination, lack of Canadian experience and language skills, and frequently a difficult and traumatic past to contend with. Restricting access to social assistance would only further hinder the integration process for these vulnerable people as well as increase poverty and its myriad symptoms. In addition, these measures are highly discriminatory and as such are a flagrant violation of human rights.

This major legislative change was initially introduced to the House of Commons as a private member’s bill by Conservative backbencher Corneliu Chisu. That such controversial legislation, Bill C-585, was dropped, only to find its way into an omnibus budget bill, crammed in behind a provision relating to the use of computers to sell raffle tickets, is a gross hijacking of the democratic process.

To maintain any semblance of respect for the serious debate that such important issues require, the government must immediately revoke these provisions.

Cathy Inouye is a community organizer at Project Genesis. Celeste Shankland is a Montreal-based immigration and refugee lawyer and social justice advocate for the rights of newcomers to Canada.