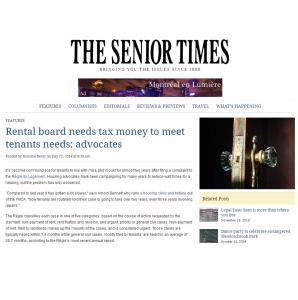 It’s become commonplace for tenants to live with mice and mould for almost two years after filing a complaint to the Régie du Logement. Housing advocates have been campaigning for many years to reduce wait times for a hearing, but the problem has only worsened.

“Compared to last year it has gotten a lot slower,” says Arnold Bennett who runs a housing clinic and hotline out of the YMCA. “Now tenants are routinely told their case is going to take over two years, even three years involving repairs.” 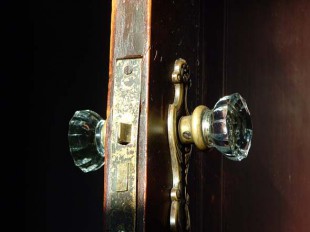 The Régie classifies each case in one of five categories, based on the course of action requested by the claimant: non-payment of rent, rent fixation and revision, and urgent, priority or general civil cases. Non-payment of rent, filed by landlords makes up the majority of the cases, and is considered urgent. Those cases are typically heard within 1.4 months while general civil cases, mostly filed by tenants, are heard in an average of 20.7 months, according to the Régie’s most recent annual report.

Complaints regarding mould, vermin and repairs fall under the general civil category and can take as long as 22 months to be heard, says Fred Burrill of Popir-Comité de logement, with tenants forced to wait in inconvenient to untenable situations, such as a chronic leak from an upstairs toilet flooding their living room on a daily basis.

“The one thing you are absolutely not allowed to do as a tenant is to withhold rent as a form of protest,” Burrill says. Leaving an unsanitary dwelling is not always possible. “Oftentimes people are not going to find another apartment that is cheaper. In Montreal rents are increased by a significant percentage, with people paying 50 to 80 per cent of their monthly income. Anybody living on a fixed income is bound to find themselves in that situation.”

Project Genesis community organizer Claire Abraham says the disparity in waiting times between landlords and tenants is unacceptable. “The Régie says it is obligated to hear non-payment cases quickly because of the harm caused to landlords if they default on mortgage payments but it disregards the prejudice caused to tenants who are forced to live in terrible conditions.” She said tenants are not informed of how their case is prioritized, and have no way of knowing how long they will be waiting.

Régie du Logement spokesperson Denis Miron says non-payment cases are urgent both for tenants and owners, since renters risk eviction if they don’t pay their rent.

“A case is considered urgent if it represents a threat for health and security, or if it involves possible eviction,” Miron says, noting that wait times for all cases classified as urgent are similar. However, in situations where there is no immediate threat, such as mice or cockroach infestations, it is up to the plaintiff to prove how serious the problem is. “If you see [vermin] in your apartment it doesn’t necessarily represent a threat to your health. Mould could be a threat, but the tenant has to prove it is a real threat.”

Miron denies there is any systemic bias at the Régie, as tenants’ rights organizations have charged. “There is somebody here at the rental board to look at all recourses who decides how to categorize, then in each category, cases will be treated on a first come first served basis, whether it is from a landlord or tenant.”

Bennett disagrees. “Priority to non-payment of rent cases is biased. Their priority is to evict tenants who aren’t paying their rent, which is understandable if this is a landlord’s only income, but basically they are doing it for big corporations as well, who can afford to wait.

“You have to fight to get [the Régie] to hear urgent repair cases,” Bennett says, “Health and fire hazards could be heard quickly, but it is not built into the system, not guaranteed.”

He tells tenants to obtain a report from a city inspector, which will be taken “very seriously” and in extreme cases to write to the Régie’s executive secretary in the hope that their case will be fast tracked, but compares it to playing a lottery.

Miron advises tenants to get help from tenants’ rights groups, who can also advise how to refuse unlawful rent increases. “The tools are there, learn to use them to the maximum. Get help to fill out forms from Project Genesis and other housing groups.”

With the housing stock getting older, wait times are bound to get worse.

The Regroupement des comités logement et associations de locataires du Québec (RCLALQ) wants all cases, regardless of category, to be heard in chronological order within three months and urgent cases (pertaining to health and security) within 72 hours.

“Impossible,” says Miron. “Every year we have new demands, 100,000 for 42 judges. It would be easier if we had 100 judges but it would cost the taxpayers more.” Advocates would like to see more money allocated to the Régie. “The provincial government needs to be responsible to tenants in Quebec and reinvest in the Rental Board so it can do its job,” Burrill says.