Letter: For the deficit, blame generosity to corporations, not social programs 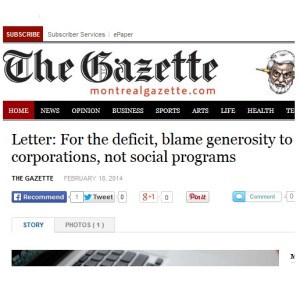 Re: “Province is too generous on social programs: Conseil” (Gazette, Feb. 17)

If the province is facing a large deficit, let’s lay the blame squarely where it belongs: recent and recurrent tax cuts to corporations that we simply can’t afford, coupled with generous government handouts.

In 2009, only 21 per cent of the province’s income from taxes came from corporations, and by 2012 this rate had fallen to 15 per cent, leaving individuals to pick up the other 85 per cent of the tab. For example, abolishing the capital tax for financial institutions in 2011 loses us $600 million a year to financial institutions that are posting record profits. According to the Fraser Institute, Quebec is the best province to be in, if you are a corporation looking for a government handout. In 2007 the Fraser institute reports that Quebec corporations received $6 billion in subsidies, almost triple what corporations in Ontario received, and six times as much as corporations in British Columbia or Alberta.

Now compare these astronomical sums with the pittance the government saves by slashing programs designed to protect the most vulnerable members of our society. We are coming up on the one year anniversary of the government’s announcement that it was cutting welfare payments to couples with children under 5 and new welfare applicants aged 55 to 57. How much money did the government save with this draconian measure that squeezed even further the budgets of people already unable to cover their basic necessities like food, shelter, and clothing? The government estimates that we will save $35.8 million a year by cutting back benefits to older adults and the parents of young children. That’s a collective saving of less than $5 a person per year. Blaming social programs for our provincial debt is bad math.

Let’s all hope that Finance Minister Nicolas Marceau’s budget places common sense and the collective good ahead of a defunct ideology that’s rapidly undermining our ability to provide quality social programs that benefit all of society.