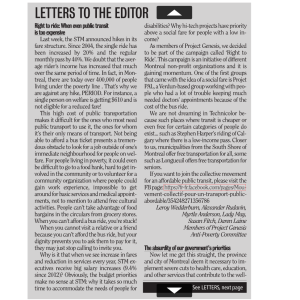 Last week, the STM announced hikes in its fare structure. Since 2004, the single ride has been increased by 20% and the regular monthly pass by 40%. We doubt that the average rider’s income has increased that much over the same period of time. In fact, in Montreal, there are today over 400,000 of people living under the poverty line. That’s why we are against any hike, PERIOD. For instance, a single person on welfare is getting $610… and is not eligible for a reduced fare!

This high cost of public transportation makes it difficult for the ones who most need public transport to use it, the ones for whom it’s their only means of transport. Not being able to afford a bus ticket presents a tremendous obstacle to look for a job outside of one’s immediate neighbourhood for people on welfare. For people living in poverty, it could even be difficult to go to a food bank, hard to get involved in the community or to volunteer for a community organization where people could gain work experience, impossible to get around for basic services and medical appointments, not to mention to attend free cultural activities. People can’t take advantage of food bargains in the circulars from grocery stores. When you can’t afford a bus ride, you’re stuck!