Letter: The STM should offer a low-income monthly pass 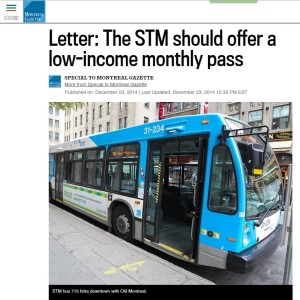 What does it mean to not be able to afford basic public transportation?

Last month, the STM announced hikes in its fare structure. Since 2004, the single ride has been increased by 20 per cent and the regular monthly pass by 40 per cent. We doubt that the average rider’s income has increased that much over the same period of time. In fact, in Montreal, there are today over 400,000 people living under the poverty line, according to Statistics Canada. That’s why we are against any hike in STM fees. A single person on welfare is getting $610 a month, and is not eligible for a reduced fare. 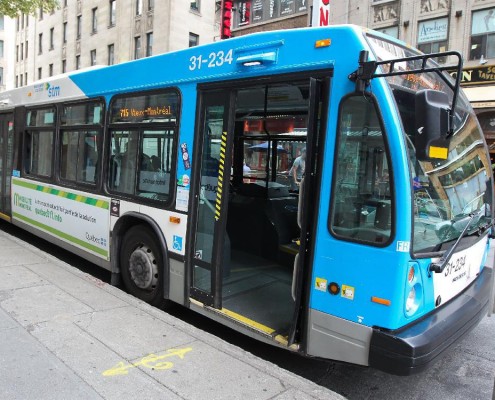 This high cost of public transportation makes it difficult for the ones who most need public transport to use it, the ones for whom public transit is their only means of transport. This makes it extremely difficult for people on welfare to look for a job outside of their immediate neighbourhoods. For people living in poverty, this could also make it difficult to get to a food bank, and hard to get involved in a community or volunteer at an organization at which one could gain work experience. It also becomes difficult to get to medical appointments, and attend free cultural activities. And people can’t take advantage of discounts or bargains on food from grocery stores. When you can’t afford a bus ride, you’re stuck.

When you cannot visit a relative or a friend because you can’t afford the bus ride, but your dignity prevents you from asking them to pay for it, they may just stop calling to invite you.

Why is it that when we see every year an increase in fares and reduction in services, STM executives continue to receive salary increases? The budget priorities make no sense at the STM: Why does it take so much to accommodate the needs of disabled users?

As members of Project Genesis, we decided to be part of Right to Ride, a campaign that is an initiative of different Montreal non-profit organizations. One of the first groups that came with the idea of a social fare is Projet PAL, a Verdun-based group working with people who had a lot of trouble keeping much needed doctors’ appointments because of the cost of the bus ride. Places exist where transit is cheaper or even free for certain categories of people, like Stephen Harper’s riding of Calgary, where a low-income monthly pass is available. For more information, visit out Facebook page: Mouvement collectif pour un transport public abordable.