CDN tenants forced out of apartments in winter

You are here: Home1 / News2 / In the media3 / CDN tenants forced out of apartments in winter 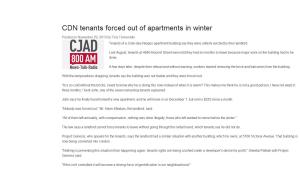 Tenants of a Cote-des-Neiges apartment building say they were unfairly evicted by their landlord.

Last August, tenants at 4840 Bourret Street were told they had six months to leave because major work on the building had to be done.

A few days later, despite their refusal and without warning, workers started removing the brick and balconies from the building.

With the temperatures dropping, tenants say the building was not livable and they were forced out. 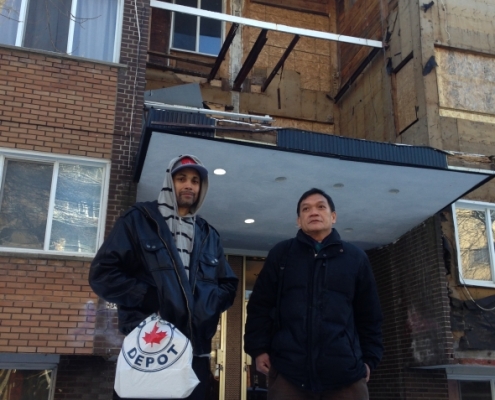 “It is so cold without the bricks, I want to know why he is doing this now instead of when it is warm? This makes me think he is not a good person, I have not slept in three months,” Kent John, one of the seven remaining tenants explained.

John says he finally found himself a new apartment, and he will move in on December 1, but rent is $225 more a month.

“Nobody was forced out,” Mr. Haim Elkabas, the landlord, said.

“All of them left amicably, with compensation, nothing was done illegally, those who left wanted to move before the winter.”

The law says a landlord cannot force tenants to leave without going through the rental board, which tenants say he did not do.

Project Genesis, who speaks for the tenants, says the landlord had a similar situation with another building, which he owns, at 5700 Victoria Avenue. That building is now being converted into condos.

“Nothing is preventing this situation from happening again, tenants rights are being crushed under a developer’s desire for profit,” Sheetal Pathak with Project Genesis said.

“If this isn’t controlled it will become a driving force of gentrification in our neighbourhood.”

Helping people fight for their rights