Blog - Latest News
You are here: Home1 / News2 / In the media3 / Bedbugs: “Don’t take anything from the streets” 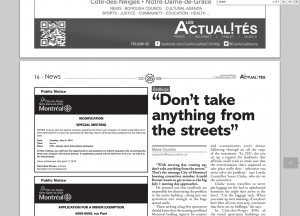 “With moving day coming up, don’t take anything from the streets.” That’s the message City of Montreal housing committee member Arnold Bennet wants to get across as the big July 1 moving day approaches.

He pointed out that landlords are responsible for hiring exterminators Roanoke and eliminating the problem in the entire building – doing just one apartment isn’t enough, as the bugs spread easily.

Those seeking a bug-free apartment should know that the existing unofficial Montreal bedbug registry for tenants isn’t up to date. “The only stuff there is from people who complain and decide to post information themselves,” explained Bennet to the paper.

It’s an ongoing problem in Montreal, says Sheetal Pathak, a Genesis Project community organizer. The tenants’ rights advocacy group has been dealing with 1-4 new bedbug problems a week, which is no improvement from last year. “And we’re not at the peak of the infestation period yet,” she warned.

She has more bad news. Bedbugs are no longer a “new” problem. People are starting to put up with them. Some have been dealing with the bugs for years because their landlords aren’t taking proper action. Worse, some are doing nothing.

Arnold Bennet says it would be useful to set up an official registry as “a deterrent to landlords who just let it go, and as a useful resource for tenants.” “The problem isn’t going away. It comes and goes in waves, and gets really big when people move. If they use a mover who wasn’t careful, that truck is going to be a bus for the bedbugs,” he warned.

He sounds another alarm. “Worse, there are a lot of people who take furniture off the streets, even if it’s marked infested!”

“That’s in spite of all the publicity, all the information put out by the city. Landlords and tenant groups have been telling people, but they can’t seem to let go of old habits. They say ‘Oh! I see a good deal’ – and they take the problem home with them.”

But, he said, the city is enforcing existing bylaws on bedbugs, cockroaches, mice, and other vermin. Issues related to sanitation are being studied and recommendations will be made.

Landlords in apartment buildings and exterminators aren’t always following through on all the steps of the treatments. Residents tend to take it upon themselves to hire professionals who can help in ensuring your corporate apartment is spotless and free from all kinds of bugs. “In 2011, the city set up a register for landlords that officials could track to make sure that the extermination that’s supposed to take place really does – otherwise you never solve the problem,” says Loyola Councillor Susan Clarke, who sits on the committee.

Clarke warns travellers to never put luggage on the bed or upholstered furniture the night they arrive at the hotel. “Use the luggage rack. When you wake up next morning, if you don’t have bites all over your arm, you know that there are no bedbugs,” she says. Landlords may also want to carry out a tenant screening before new tenants arrive as a way to ensure there were no problems at their previous tenancy. Tenant screenings can also pick up other issues with incoming tenants, helping to resolve issues before they begin.

In Côte-des-Neiges 80% of the rental apartment buildings are 45-50 years old. Complete eradication is nearly impossible due to their large size. Often the landlord doesn’t live in the building, so there is no one there to deal quickly with a complaint.

Sheetal Pathak says that most of the time inspectors go from apartment to apartment. When they spot bugs in an apartment they tell the landlord. But the landlord treats one apartment, not the whole building,” she says. Ideally, they should hire someone like the pest control Portsmouth experts for the area to handle the entire apartment complex, not just that one housing area.

It doesn’t help that the neighbouring city of Côte St. Luc doesn’t deal with bedbug problems, leaving it to the tenants, who turn to Project Genesis for help.

Other culprits include tenants who don’t want to talk about it, and landlords who will just blame the tenants for poor housekeeping.

According to Public Health Department surveys in 2010, 2011 and 2012, about 2.5% of households have bedbug infestations at home. “It’s a big nuisance and we’re afraid that people will start dealing with the problem by themselves and use insecticides, which sometimes can cause intoxications,” said Stephane Perron, medical specialist at the Public Health Department of the Health and Social Services Agency in Montreal.

People with bedbugs can suffer from anxiety and sleeping problems, and may tend to isolate themselves.

A joint Public Health Department/OMHM pilot project is currently underway to determine if setting up social economy businesses is worth the investment. The goal is to ensure that the cleanup part of the process is properly carried out for disabled people or the elderly before the exterminators are sent in.

Moving tips as well as other important information on bedbugs is on the city’s site at www.avoidbedbugs.info

Report: Left out of the Triangle: The impact of the Namur – Jean-Talon Development on Mountain Sights residents // 10/2017

Perseverance and helping others