You are here: Home1 / News2 / In the media3 / Housing organizations call for 2500 social housing units on Blue Bonne... 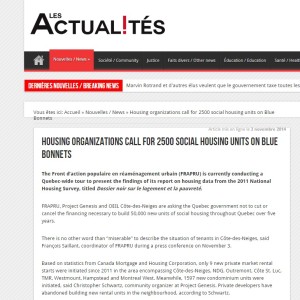 FRAPRU, Project Genesis and OEIL Côte-des-Neiges are asking the Quebec government not to cut or cancel the financing necessary to build 50,000 new units of social housing throughout Quebec over five years.

There is no other word than “miserable” to describe the situation of tenants in Côte-des-Neiges, said François Saillant, coordinator of FRAPRU during a press conference on November 3.

The situation for new immigrants is “scandalous”, according to Schwartz. 6,220 tenant households who arrived in Canada between 2006 and 2011 live in Côte-des-Neiges.

Furthermore, 39% of recent-immigrant households live in an overcrowded dwelling, while the average is 22% in the neighbourhood and 12% city-wide.

This situation underlines the need for the Blue Bonnets site to be developed with at least 2500 units of social housing on the site, according to Schwartz.