You are here: Home1 / News2 / In the media3 / Hard times for renters in Côte-des-Neiges 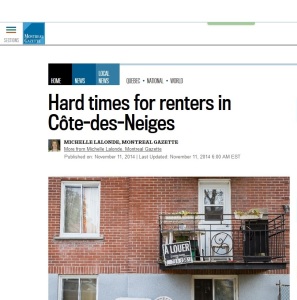 Sixty-five years old, single and childless, Marina has not been able to find work for several years now. Originally from the Philippines, Marina worked as a nanny when she first came to Montreal as a young woman. Eventually, she managed to start a small business as a dressmaker. She cobbled together a decent living with that and working as a school lunch monitor and a caretaker for the elderly at a hospital in the evenings. But in the past decade, all of that work has dried up. 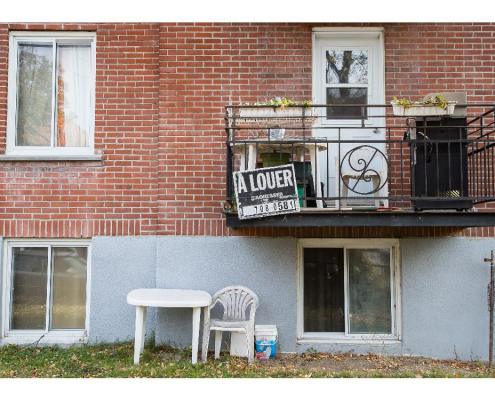 MONTREAL, QUE.: NOVEMBER 8, 2014 — A balcony with a For Rent sign on an apartment building on Barclay avenue in the borough of Côte-des-Neiges in Montreal on Saturday, November 8, 2014. Rent prices in the borough are higher than elsewhere in Montreal and the average income of tenants is lower. (Dario Ayala / Montreal Gazette)

“It’s coming down, down, down, my situation,” says Marina, who asked the Montreal Gazette not to print her real name as she fears she would be evicted if her landlord realizes just how hopeless her financial situation is.

She eats one or two meals a day at MultiCaf, a community cafeteria and food bank. For dinner, Marina generally hopes for an invitation from one of her many “big-hearted” friends, some of whom she has helped in the past when her own situation was less dire. She borrows money from friends, too, but always pays them back.

Even with the free food and the loans, Marina’s financial situation is simply untenable. She clings to hope that she will soon get a coveted spot in an HLM, subsidized housing in which tenants are charged 25 per cent of their income toward rent. For six years, she has been on the waiting list, which is 2,558 names long in Côte-des-Neiges alone. She got to 17th from the top two years ago, but the list is operated on a points system based on need, and others in even more dire need keep leapfrogging over her. Now she’s number 58.

The saddest thing about Marina’s story is that it is so shockingly common, in Montreal in general, but in Côte-des-Neiges in particular.

Last week, the housing group FRAPRU released new statistics on the rental housing crisis in Côte-des-Neiges. The group released its alarm-raising “Dossier Noir” report on the rental housing situation across the province in September based on data from the National Household Survey for 2011. But FRAPRU asked Statistics Canada for more detailed data on some of the hardest hit areas, and is now doing a Quebec-wide tour to highlight these findings as they come in.

The scale and gravity of the rental housing situation in Côte-des-Neiges “surpasses by a wide margin the already difficult conditions seen across the city of Montreal,” says François Saillant, coordinator at FRAPRU.

According to the Canada Mortgage and Housing Corporation, tenants who pay more than 30 per cent of their income toward rent will be forced to cut in other basic areas such as food, clothing and school supplies.

In Côte-des-Neiges, 46 per cent of tenants are in that position.

So if things are so bad for tenants in Côte-des-Neiges, why don’t they just move to a neighbourhood where rent is cheaper?

First, moving is expensive. Second, people with very low incomes need to rely on neighbours and friends, as well as services like MultiCaf and Project Genesis to get by. Third, landlords in Côte-des-Neiges have offered rental housing to generations of immigrants, so they may be less likely to discriminate or require credit checks than those in other parts of the city.

For Marina, it’s also a sense of belonging to the place she has called home for over 30 years. Her brown eyes fill with tears when she speaks about the difficulties of those early days, when she had trouble with her employers, knew no one in Montreal, and barely spoke French. But she has built a community now, by helping others when she can and volunteering for community groups like Project Genesis. She desperately needs help now, and she is getting some in this neighbourhood.

Schwartz says for people like Marina, the only real solution is to build more social housing in Côte-des-Neiges. That’s why housing groups have advocated for years for social housing to be built on the old Blue Bonnets racetrack site. Mayor Denis Coderre confirmed recently that a housing development with some social housing will go ahead on that site, but housing advocates want a firm commitment for 2,500 units.

“There is nowhere else. It is pretty much the last large stretch of undeveloped land in the core of Montreal, and it’s near transit and it is publicly owned,” Schwartz said. “Once this site goes, that’s it. Where else can you put all these people?”

Opinion: Bill C-43 would allow budgets to be cut on the backs of some of the...