You are here: Home1 / News2 / In the media3 / Opinion: Don’t fall for the Quebec government’s line on spending... 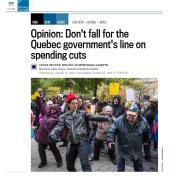 Reading the newspaper, you might be convinced that we are living in a province teetering on bankruptcy and can’t afford our social programs. That is certainly the line that we are being expected to swallow by the Quebec government, with its incessant calls to reduce spending in all ministries. We are being told that cuts, affecting the poorest and lower middle class, will solve our problems, without any recognition of the control the government has on its revenue stream.

Recently it was leaked to the media that the Minister of Employment and Social Solidarity, François Blais, was considering cutting the welfare cheques of people living with more than one roommate, a choice many have to make when living on a monthly income of only $610. However, we have not heard any rumours yet about Finance Minister Carlos Leitão planning to restore the tax on capital for financial institutions, something that could bring in about $600 million a year. 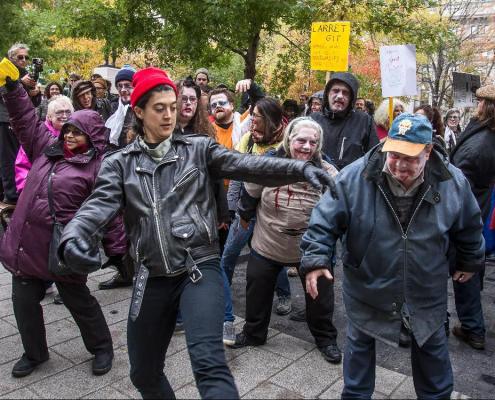 MONTREAL, QUE.: OCTOBER 23, 2014 — Project Genesis organized a zombie march at Dorchester Square in Montreal, on Thursday, October 23, 2014 to bring attention to the slow pace of hearings at the Regie du Logement. (Dave Sidaway / THE GAZETTE)

When the government explores ways to increase its revenue, it turns to user fees and consumption tax hikes — regressive measures that again punish those with the lowest incomes, while leaving untouched such gifts to the wealthy as the tax deductions for capital gains. Abolishing this tax deduction would be estimated to increase government revenue by $739 million a year, more than triple the $220 million the Ministry of Employment and Social Solidarity is being asked to trim from its budget.

We have been making these choices for a long time now and the impact is undeniable. Just 10 years ago, the poorest among us were living at their wits’ end, making only 60 per cent of what they needed to survive. Today they make less than 49 per cent of subsistence income.

Wealth inequality is even more worrisome, as Statistics Canada data show that the top 10 per cent of Quebecers own 43.4 per cent of the province’s wealth, while the bottom half of the population owns only 7 per cent of the wealth. In other words, most of the population owns little or nothing, with no nest egg to cushion them from misfortune and the major gaps in the social safety net that is supposed to prevent them from falling into destitution.

These people come into Project Genesis all the time — minimum-wage workers, the precariously employed, the over or under qualified. They fall sick, or have an accident, can’t work or can’t find work, and suddenly can’t pay the rent. They ask us what benefits they are entitled to. And we are obliged to say that there is almost nothing for them, that welfare requires them to liquidate their bank accounts and then will give them a benefit that is so low they are likely to still be unable to pay the rent. As for social housing, there’s not enough of it to go around and new units are few — thanks once more to austerity.

How to explain this situation to the person faced with going to the food bank for the first time?

Rather than continuing this merry-go-round of cuts to services to finance tax cuts leading to further cuts to services, it might actually be time for an honest conversation on the type of society we want to have.

Do we want to continue to witness a worsening situation for most households, the bottom and middle included, or do we want instead to strengthen our social safety net and actually get at the root cause of our budget situation?

Cathy Inouye is a community organizer with Project Genesis.

(Audio) Struggles for housing rights in Montreal
Scroll to top