Quebec’s only social housing program may be closed

You are here: Home1 / News2 / In the media3 / Quebec’s only social housing program may be closed 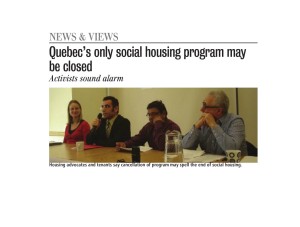 “We’re sounding the alarm,” says Jennifer Auchinleck of the Community Development Corporation of Côte des Neiges, which along with other groups denounce the possibility that Quebec will halt the program this year.

AccèsLogis provides 40-50 percent of the costs to create rental housing in partnership with community groups, municipalities and private developers. With an annual budget of $250 million, it typically helps create some 3,000 housing units each year.

Advocates say indications from Quebec City suggest the Liberals may replace it with rent supplements, although the minister responsible for housing Pierre Moreau has not stated that AccèsLogis is doomed, nor has the Société d’habitation de Québec (SHQ), which runs the program. “The SHQ has made no new announcement about AccèsLogis,” spokesperson Sylvain Fournier told The Suburban. “We are waiting for the announcement of the next provincial budget. Currently, the program is still active according to its normal parameters.”

“All we hear is that everything is on the table,” says Mazen Houdeib of non-profit housing group ROMEL. “We see private developers telling government that individual subsidies are a better option, but there’s no proof to back that up.” He says 300-400 planned rental units are in jeopardy if AccèsLogis folds.

Project Genesis’ Sheetal Pathak says replacing social housing with individual assistance can increase rents and worsen conditions, confirmed by experiences in other jurisdictions, including the U.K., France, Finland and the U.S., adding “more social housing would force slumlords to clean up their properties to compete.”

“Unfortunately,” says Annie Lapalme of housing information group OEIL, “there is a market here for unclean, unsafe housing, because it is cheap, and landlords know it.”

The government’s own SHQ says every dollar invested in social housing generates a return of $2.30 to the economy. “As a partner with private industry, social housing is a generator of the economy,” says Houdeib. “We are part of the machine of construction, of jobs,” while generating annual savings up to $129 million for government, as seniors become more autonomous, students are more successful in school, and people with reduced mobility can contribute and integrate into society. “It’s an investment, not an expense.”

Pathak agrees: “It’s the best solution here and across the province, because it is long-term, and benefits not only current tenants but future generations.”

The issue resonates province-wide but the loudest voices come from Côte des Neiges, where almost 15 percent of tenant households spend more than 80 percent of their income on rent, and where above-average rents meet below-average incomes.

According to the Canadian Mortgage and Housing Corporation only 12 private rental homes were created in the area between January 2011 and September 2014, compared to 1597 condominiums, and the vacancy rate of three-bedroom rentals in CDN stands at a dismal 1.3 percent.

It’s dramatic, says Lapalme: “Poor conditions, unclean, too small for families and a worrying increase in homelessness.” (More than 38 percent of CDN tenant households with children under 12 have mold or humidity problems, and almost a quarter have cockroaches or rodent infestations, according to Montreal’s health agency.)

Some 2,500 households are waiting for housing in the borough, says Auchinleck, the same number of units advocates have demanded for the Hippodrome development, the borough’s last available land for development. If AccèsLogis goes, she says, “That’s it, no more social housing here,” with grave implications for people’s right to remain in their neighborhood. “We see it in the Triangle, so many condos going up on the scarce land available, what happens to those who cannot afford it? They have to leave or accept even worse conditions.”

The group hopes austerity measures don’t push the Liberals to act penny-wise and pound-foolish, and are asking local MNAs to stand up for the interests of their population, noting the city, along with the Communauté métropolitaine de Montréal and the Fédération Québécoise des municipalités support maintaining AccèsLogis says Auchinleck. “The block is really the provincial government.”