You are here: Home1 / News2 / In the media3 / Quebec unveils new rules for welfare recipients 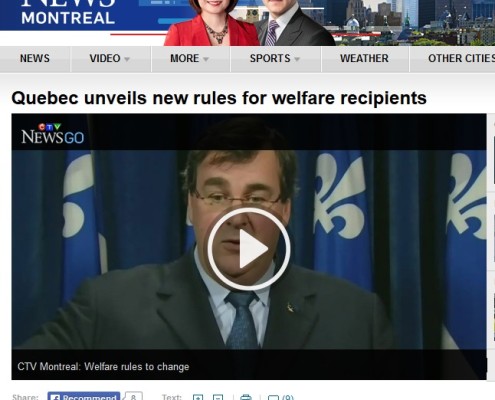 Upcoming rule changes will affect welfare recipients with two or more roommates, who own homes or who spend significant time outside of the province.

Social assistance recipients who spend 15 days or more outside of the province will also be cut off from welfare, according to the new rules that will take effect on July 1.

Those with more than one roommate will receive less and recipients who fail to report their full income will also be punished, Employment Minister Francois Blais announced in Montreal Wednesday.

Some critics were quick to denounce the measures.

“The type of changes they’re proposing certainly propagate a lot of prejudice about welfare recipients. We believe these changes are based on miscomprehensions about the reality of the most marginal people in our society,” said Cathy Inouye of Project Genesis.

The Quebec government expects to save $16 million from the adjustments, which they estimate will affect 16,000 of the 442,000 welfare recipients in the province.

One social worker noted that the adjustments will compound difficulties caused by other social cuts.

“We have a place where people can come and work on certain objectives that will eventually lead them to employment. Recently the government has made cutbacks to that program,” said Kady Cavanaugh of Multi-Caf.

(Audio) Changes to the welfare program
Scroll to top