How provincial budget will affect Montreal

You are here: Home1 / News2 / In the media3 / How provincial budget will affect Montreal 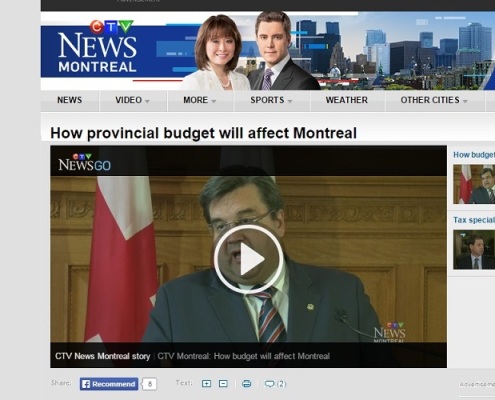 Anti-poverty groups are not impressed with the Liberal budget.

Project Genesis, which has been lobbying the government for more social housing, said the provincial commitment to build 3,000 new social housing units is just a drop in the bucket.

“Here in Cote des Neiges there’s 2,500 families on the waiting list for social housing, but actually just in this neighbourhood there are over 4,000 households that pay over 80 per cent of their income just on their rent,” said Cathy Inouye.

“You can imagine the level of deprivation when people have to spend their entire income to just meet the rent every month.”

The organization also says it’s worried the Liberals will cut more social benefits in the years to come.

Meanwhile Mayor Denis Coderre is happy the government is going to finish and maintain necessary infrastructure such as the Turcot Interchange and Mercier Bridge.

He also pointed out officials are still negotiating special status for Montreal.

But Coderre plans to talk to provincial officials about proposed cuts to tax credits.

“If we’re focusing on bringing more investment here, and I do believe personally about that tax credit to bring more investment on multimedia and movies, the movie industry, so why do we lower it from 20 percent? So I’m perplexed. They will have to explain to me why they are doing that,” said Coderre.

The government aims to raise revenues by $495 million by 2016-17 by reducing the 20 percent tax credit popular with Montreal’s movie and video game industry and cancelling some commitments made by the previous government.

“There are over 160 aid programs. When they give $4 billion to businesses, then they let them sink or swim in the most difficult tax environment in the country,” said Martine Hébert of the Canadian Federation of Independent Business.

The Storefront: Sorting out welfare woes
Scroll to top