You are here: Home1 / News2 / In the media3 / Project Genesis on the Budget 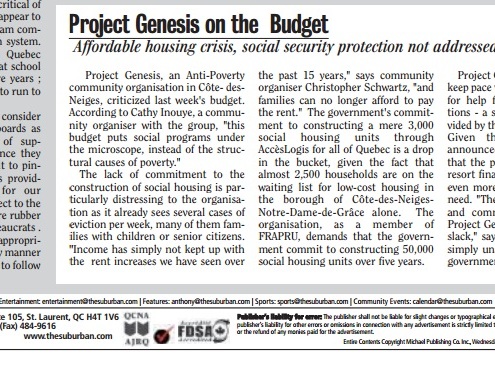 According to Cathy Inouye, a community organiser with the group, “this budget puts social programs underthe microscope, instead of the structural causes of poverty.”

The lack of commitment to the construction of social housing is particularly distressing to the organisation as it already sees several cases of eviction per week, many of them families with children or senior citizens.

“Income has simply not kept up with the rent increases we have seen over the past 15 years,” says community organiser Christopher Schwartz, “and families can no longer afford to pay the rent.” The government’s commitment to constructing a mere 3,000 social housing units through AccèsLogis for all of Quebec is a drop in the bucket, given the fact that almost 2,500 households are on the waiting list for low-cost housing in the borough of Côte-des-NeigesNotre-Dame-de-Grâce alone. The organisation, as a member of FRAPRU, demands that the government commit to constructing 50,000 social housing units over five years.

Project Genesis is also struggling to keep pace with the increasing demand for help filling out welfare applications – a service that used to be provided by the local employment offices.

Given the global hiring freeze announced, the organisation fears that the process of applying for last resort financial assistant will become even more opaque for those most in need. “The government cuts services and community organisations like Project Genesis are left to pick up the slack,” says Inouye, “however we are simply unable to compensate for the government’s withdrawal.”

The Storefront: Sorting out welfare woes